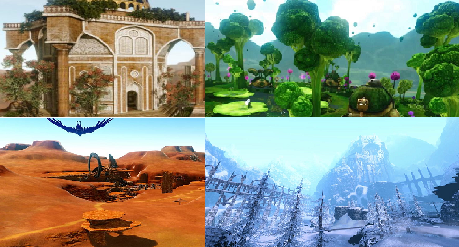 A harsh and unwelcoming landscape, the Sunbite Wilds burn beneath the unflinching glaze of the sun. Few people possess the fortitude to simply survive in these wastes, and fewer still have what it takes to thrive.
Still, where there is a will, there is a way, and the Warborn are nothing if not willful. Through blood, sweat, and backbreaking labor, the Warborn have managed to carve out a livable home for themselves. The clever Haranyans taught them how to irrigate the desert and grow food, while the scorching sands create a natural barrier that repels their enemies.

Redemption is a somber city, not a place where the Warborn celebrate their feats, but rather a safe haven where they can live in peace. Where other cities would feature wild and extravagant adornment, Redemption favors simple aesthetics chosen for their practicality. It may not be a beautiful place, but that doesn't make it any less a home.

An undeveloped paradise to nature lovers, the Rokhala Mountains are home to clear streams, evergreen trees, tall spires, and adventurers looking to settle down and live peaceful, if somewhat isolated, lives.
Travel between the area's tall peaks and deep valleys is aided by a rudimentary rope and pulley system constructed by some of the region's earliest inhabitants. Not only does it allow travelers to avoid rough trails, but it also provides a bird's-eye view of the area's majesty.

While not nearly as cold as Airain Rock, these mountains still enjoy a slight chill throughout the year. Mists are a common sight, but only serve to exemplify the natural wonder of the Rokhala Mountains as they dance along the surface of babbling stream or drift among fields of waterside flowers. 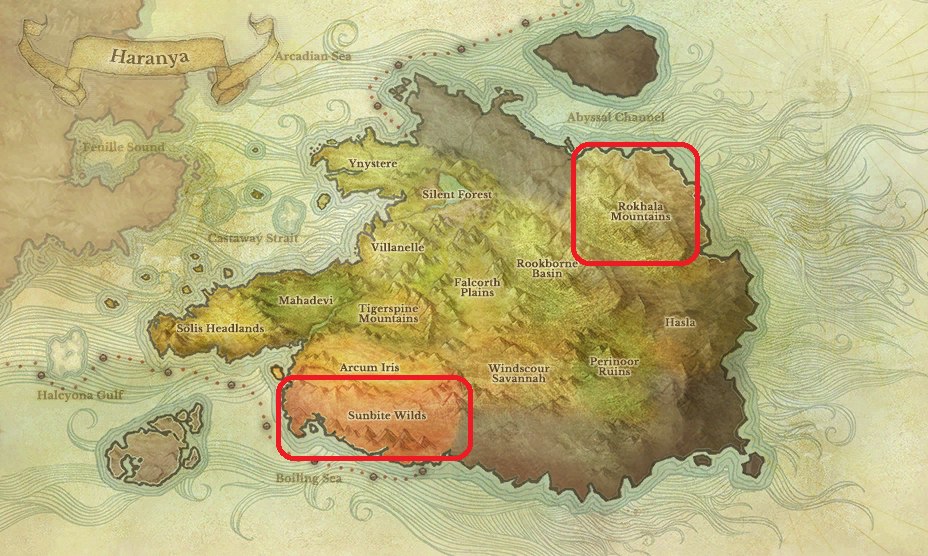 Shielded from the worst of the icy storms that buffet Airain Rock, the Aubre Cradle is a verdant valley that serves the Dwarves well. While Airain Rock brims with valuable minerals and metals, Aubre Cradle provides the food and trade that sustains the Dwarven way of life.

The snowmelts from the high peaks run down the mountains and through the valley, coming together to create crystal clear streams and rivers that still carry the icy chill of Airain Rock with them.

Located in the heart of Aubre Cradle, Ironwrought has grown immensely over the years. Once nothing more than a collection of huts, this bustling village now serves as a center of commerce for the Dwarves, hosting traders, travelers, and adventurers alike.

Airain Rock towers over the surrounding lands, its massive, icy peaks piercing the skies above them. Blanketed in deep snows year round, these mountains are trapped forever in an unending winter.
These lands are the ancestral home of the Dwarves, and the mountains their boon companions. Not only have the intimidating spires served to protect and shield the Dwarves, but they have also supplied them with the stone and metal that are the keys to the Dwarven way of life.

Built directly into the mountain rock, the towering fortress-city of Andelph is the center of the Dwarven world and a testament to their workmanship. It is a rare traveler who can stand in the cavernous heart of the mountain stronghold and not be awed by the artistry and skill that created such a marvel.

Ahnimar is the homeland of the Daru. It's a land of strange wonder. The environment colored with a verdant green with splashes of pink. It is grassy with many small ponds.
Broad and beautiful lagoons that shine like sapphires, gentle hills as green as emeralds, a temperate climate year round, and, of course, the cries of Daru looking to do business make it a welcoming and peaceful land.

Exotic and unusual plants found nowhere else in Erenor grow here with wild abandon. Gargantuan lily pads, luminescent puff flowers, algae trees... Of course, no plant is as strange as the native marsh "trees," whose florets (when served with melted cheese) are considered a delicacy all across the world. - The zone map for Arcum Iris and Halcyona Gulf has been slightly modified.

Bring on the new zones! BTW I would like to add that it is March and I don't see 3.0 live lol. JK btw. I'd rather it take longer and get released properly instead of being rushed and full of problems.