This thread includes all the main information related to the basic 4.0 global update.​
It doesn’t mean that all these updates will be included, as we’ll have our custom changes from the previous versions transferred to 4.0 as well as other custom updates that will be posted with our official 4.0 custom update patch notes.​
We are posting information on 4.0 updates here, so you could go through them, discuss and throw in the ideas with explanations on what you think should be changed or maybe even not needed to be implemented from this list.​
So, this thread is only to refresh your memory on main 4.0 changes (for those who played that version before) or provide you with the information on the changes (if you never played it before and had no idea what 4.0 actually changes).​
Discussion threads are opened separately.​
- For general 4.0 discussion follow this [Link]
- For New Gems System discussion follow this [Link]

Staff member
Administrator
New Naval Combat Arena – Bloodsalt Bay​
Sail through pounding storms and the wailing undead in new naval arena, Bloodsalt Bay! Dominate the waters with your ship’s crew against the monsters of the depths, and other crews looking to claim victory in vessels of their own!​
​
Upon entering, you'll be placed on a team of up to 5 other adventurers. Your goal: Pilot your ship and collect as many souls as possible, either by hitting them with a cannon or ramming them with your ship.

But 3 other ships will be sailing into the Maelstrom to stop you from your task. And there's a terrifying monster residing in the middle of the Arena. And there may be other monsters lurking outside of the Maelstrom. And there may be some magical enhancements hiding behind breakable, coral walls. And you only have 12 minutes to complete your task.​
Last edited: Sep 13, 2019

Staff member
Administrator
New Raid Bulletin Board & Co-Raid​
Looking to get an extra edge on your raid organization? Look no further than the improvements to the Raid Bulletin Board and Co-Raid system!​
To advertise your raid to other prospective adventurers, simply open the raid panel in the lower menu and then click on the magnifying glass icon. From there you'll be able to browse other raids or make your own in the Raid Bulletin Board. Just select what you want to do, what time you want to do it, how many folks you're looking for, and you'll be on your way!​
For those raids who find that they may be more popular than usual, you can forge a co-raid between two raids to create a group of up to 100 players. Everyone involved can get credit for participating in the activity, and you can even see the different raids and raid leaders indicated on the map.​
​
If you’re looking for friends or just strong allies to join you on a difficult mission, you will now have the ability to post to the new Raid Recruitment Board. All applicants can be reviewed before being accepted. Set the time you’re venturing out, number of players needed, and choose your activity – Raid (Kraken, Red Dragon, Leviathan, Thunderwing Titan, or just world bosses), Faction War (Mistmerrow, Golden Plains Battle), or other world events. If you’re accepting a call to action you’ll even be able to reply with the role you wish to serve in the adventure!​
​
Once you’ve got a raid together, you might realize you need even more warm bodies to tank, dps, and heal. With the new Co-Raid system two raids of up to 50 adventurers each can join forces. Each raid keeps their own leader, but one is the Commander and the overall leader is the Admiral. If you’re the raid leader, a simple right-click menu option to form a Co-Raid is all you need to team up and take down your targets.​
Last edited: Sep 13, 2019

Staff member
Administrator
New Title Collection System​
Mix and match your titles and unlocked stats. Visit the new Title Collection System (located in the Character window, where the old title change button resided) to view all of the titles in the game and how to achieve them. As you unlock titles, you will gain their related stats as an upgrade option and you'll earn experience in the collection system. The more title levels you gain, the more icons you can display next to your name in-game!​
Changing title effects will not require a Title Swap Certificate, but changing icons will. You can find the Icon Swap Certificates at the General Merchant.​
Last edited: Sep 13, 2019

Staff member
Administrator
New Lunagem System​
​
The Lunagem system has had a long awaited overhaul: No more RNG when slotting gems! Now with 100% chance to socket!​
​
The lunagem system has received a complete overhaul to allow for the guaranteed socketing of gems! Going forward, everyone will have the ability to fully gem their gear with no worry of losing their progress.​
​
​
What Is Happening To Old Gems?​
​
Here’s a helpful chart that shows off the new set of gem stats and the changes to where they can be socketed. If you do not see one of the pre-4.0 gems in this chart, then it will no longer be able to be crafted or upgraded once 4.0 hits.​
​ 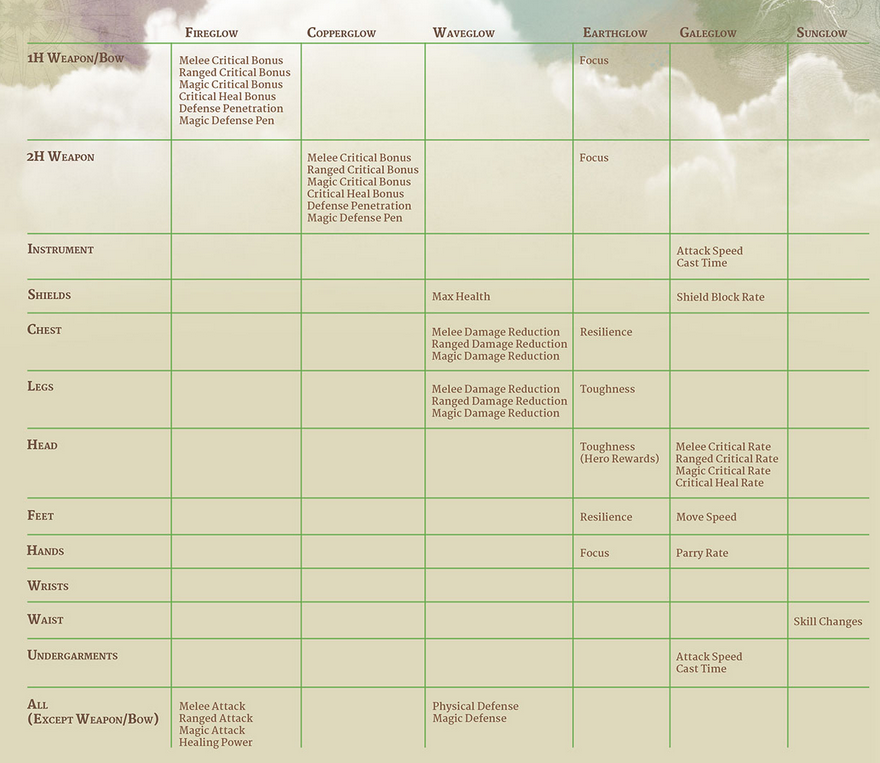 ​
Lunascales will not be able to be crafted in 4.0 either, but all old gems will remain socketable alongside the new gems. It will cost 500 Labor to socket a new gem. Old and new gems alike may also be unsocketed using a Mornstone (price change: 2400 Honor) and 500 Labor. The potential failure-to-socket functionality of the old gems still exists, which would remove all gems on the gear, including new gems. So better to socket old gems first, and then the new gems to avoid this horrible fate.​
​
There are no changes to Lunafrosts in Maelstrom. The stats for Hero gems have changed and will also be able to be extracted and resocketed.​
​
​
How To Make New Gems​
​
If you’re looking to start crafting a new T1 gem, be sure you’ve got 10,000 Honor, then check out the Honor Shop. To upgrade a T1 into a T2 head over to your nearest Handicraft Bench.​
​
Lunarite is still used to upgrade the new gems and can be most commonly found in the following places:​
​
In 4.0 there will only be two tiers of Lunarite – Fine(T1) and Superior(T2). All pre-Maelstrom Lunarite converts to the new Lunarite in your inventory.​
​
The current tiers will transform and convert in the following way:​
​ 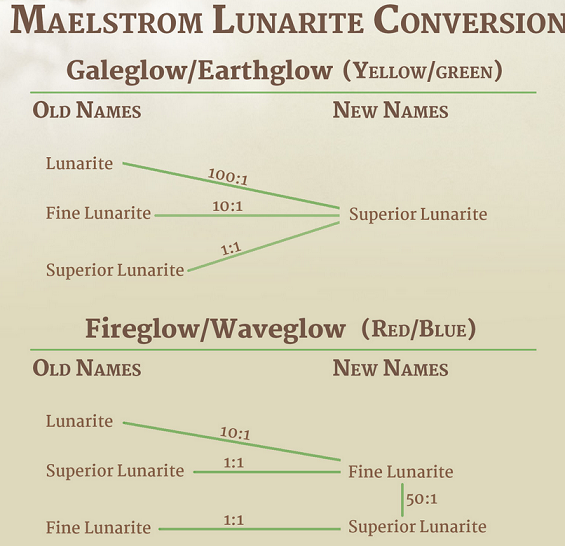 ​
​
How Do New Gems Work?​
​
The new gems will 100% socket, without a chance to fail like the old gems. Because everyone will have the ability to ‘full gem’ without any RNG, the new gems will cost 500 Labor and more gold than the previous system. The cost in the old system was quite variable due to the RNG failure, and having to recreate and re-gem your gear upon failure. This rebalancing of cost is made in consideration of the old system costs and new lack of RNG.​
​
There are six categories of gems, each of which can be uncloaked to select specific stats and socket placement. Gems can only be upgraded in their cloaked state — but don’t worry, all new gems can re-cloaked using a Transmuter. If you’d like to extract them, it’ll cost you a Mornstone and 500 Labor as previously stated. They may be re-socketed into different gear, or even into the same gear after you’ve upgraded it. If you’re looking to make some gold, you can even trade or sell them on the Auction House!
The new Maelstrom gem system overhaul has removed the RNG in favor of a more stable system and allows all players to reach their full-gem potential.​
Last edited: Sep 13, 2019