Below you’ll find all the details related to the changes applied with 5.0 update (basic and custom) as well as the information on the release.

5.0 global update release date – November, 3rd
(time of the release as well as the maintenance details will be posted later)

Follow the link for 5.0 Patch Notes in:
Spanish
Portuguese

New Zone: Journey to an all-new, unexplored zone: the Western Hiram Mountains.
New challenges await the champions of Erenor in this stunning new endgame region.
Face challenges and conquer them to attain new gear, increase your Ancestral level, and more!

Malediction: This new expansion also introduces a brand-new skill set for the first time ever in ArcheAge!
Malediction allows players to use powerful dark magic to exploit their enemies’ weaknesses while empowering themselves.
The 11th skillset for ArcheAge, Malediction adds 45 new class combinations for players to experience.

New Tempering System: The new tempering system allows the stats of armor and weapons to be improved to
a maximum of +30 Tempering Points, which is equivalent to 125%.
The new Solar and Lunar Tempers can be obtained from Prince’s Crates, Queen’s Crates and Ancestral Crates,
as well as from mining the Mysterious Minerals that spawn in the Western Hiram Mountains.

​
The Western Hiram Mountains has been added to the Auroria map, bordering Reedwind to the north.​
​
This new zone has a Tropical, Subarctic and Arid climate and follows a 10min conflict period, followed by 50min of war and then cycling into 60min of peace. During war, the Loot and Gold Drop Rates are increased to 130%.​
​
The Western Hiram Mountains feature a variety of new monsters, of which the majority are Ancestral Level 7. These monsters drop Ancestor’s Coinpurses and Ancestral Crates, as well as Radiant Hiram Awakening Scrolls, used to awaken your T3 Hiram Guardian Equipment. Included in their drop tables are also Mysterious Hiram Infusions, which can be identified using up to 50 Labor and can contain Hiram Infusions of grade Rare (300 XP), Arcane (400 XP) or Heroic (700 XP).​
​
Also featured in this zone are new mining nodes called “Mysterious Mineral”, which can be mined to obtain Copper, Silver and Gold Ore, but also have a chance to drop the new Lunar and Solar Tempers, as well as Radiant Hiram Awakening Scrolls and Mysterious Hiram Infusions.​
​
While adventuring in this zone, players can also gain temporary buffs from aiding Wounded Hiram Owls and Injured Owlinas, giving Serpent Abominations their final rest and destroying Cube Shards that omit an ominous energy. The buffs don’t stack and fall off, as soon as the player leaves the zone.​
​
The following buffs can be gained:​

​
A series of new achievements have also been added for this zone. Some of them rewarding a new title and title icon once completed:​
The Agents of Andrion and Amarendra found in the Nuian and Haranyan faction headquarters offer a free teleport to the trail head in Reedwind.​
Pirates can head straight over and record the 3 new teleport locations in their books, for convenient access later. Talking about Pirates – all 3 camp areas have an aura of protection, similar to the protection aura at Trade Outlets, that block PvP and therefore there’s no pesky Guards that try to attack you.​
​
And don’t venture too far north, or the bitter cold of the Millennium Blizzard will certainly freeze you to death.​

Awakening World Boss Equipment​
The recipes to upcraft the following items have been removed. Instead, World Boss specific Awakening Scrolls can be crafted at any Proven Warrior Workbench, and used to unlock the second tier.​ 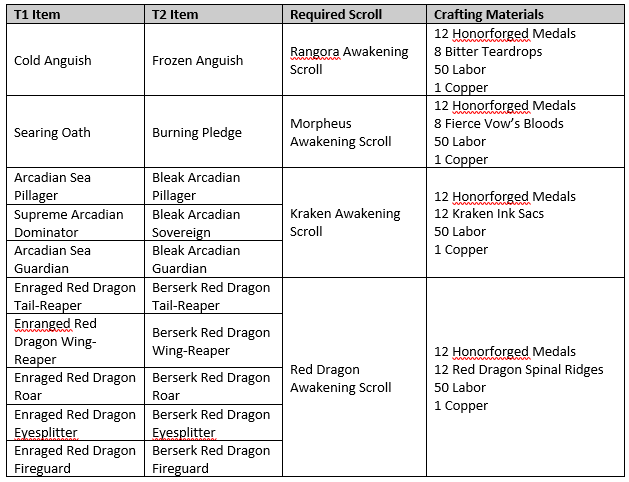 Cloak Changes and Awakening​
The “Flaming” subtypes of cloaks are no longer obtainable in game. Instead the two will be combined into the same cloak. Delphinad and Ayanad cloaks can have 1 stat from group 1 and 3 stats from group 2 at the same time. Cloaks obtained before the update will keep their current stats, but can be cloaked using a Transmuter to obtain any of the new cloaks. Cryptic Lucky Scrolls can now be used to reroll stats on Delphinad cloaks as well.​ The acquisition method of the Delphinad and Ayanad tier cloaks has been adjusted as well:​

Discontinued Obsidian Equipment​
All crafting recipes for Obsidian equipment will be removed. This means that existing Obsidian items will remain in the world, but they can no longer be upcrafted to higher tiers or created.​
Remaining Obsidian items can still be gemmed, regraded and tempered.​
Using a Hiram Conversion Rune, crafted at the Mirage Salvage Forge for 1 Stone Brick, allows to convert existing Obsidian equipment into Hiram Infusions. Each Hiram Infusion is worth 1,000 Synthesis XP and the amount of infusions granted depends on the Obsidian item’s tier, slot and grade.​ Using an Erenor Conversion Rune, crafted at the Mirage Salvage Forge for 1 Stone Brick, allows to convert existing T2, T3 and T4 Obsidian equipment of grade Celestial or higher into Erenor Infusions. Each Erenor Infusion is worth 100 Synthesis XP and is tradeable as long as it’s sealed. The amount of infusions granted depends on the Obsidian item’s tier, slot and grade.​
The Erenor Infusions will maintain the grade of the item when converted, and can only be fed into Erenor gear of the same rarity or lower.​ The following items used to craft Obsidian equipment will no longer be obtainable in game. Remaining items can be sold to a merchant:​
Last edited: Oct 27, 2020

The new tempering system allows the stats of armor and weapons to be improved to a maximum of +30 Tempering Points, which is equivalent to 125%.​
Old tempering items will no longer be obtainable in game, but remaining items can be converted into relevant items or back into the originally invested cost.​
​ New Skillset - "Malediction" is added to the game.​
The Malediction skillset is symbolized by Orchidna, the Demon Queen. Abyssal voices corrupting her mind unleashed a force of evil magic that she passes down to her devotees. These demonic powers allow them to exploit the weaknesses of their enemies and further enhance their abilities when stacking charges.​ 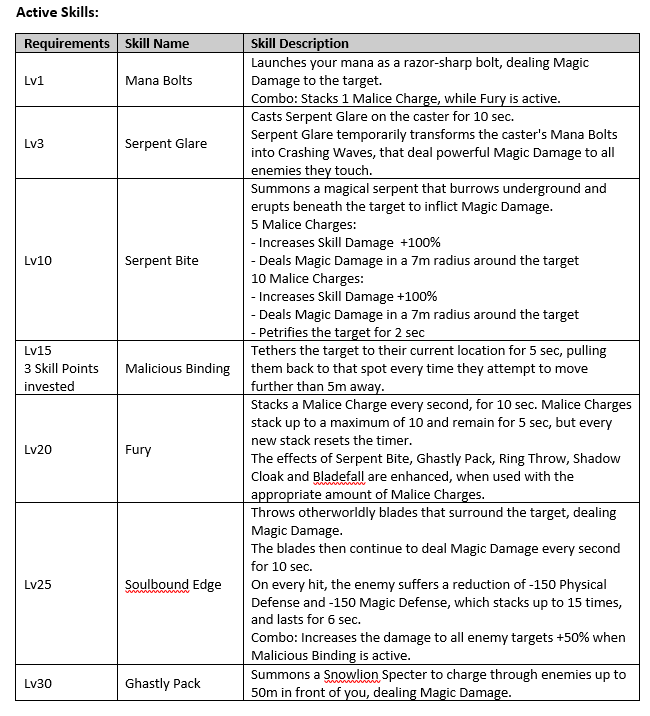 Unlocking Ancestral Level 1 now only requires 1 Honorforged Medal, available on the Honor Shop for 2000 Honor. All levels after that require only experience to advance.​