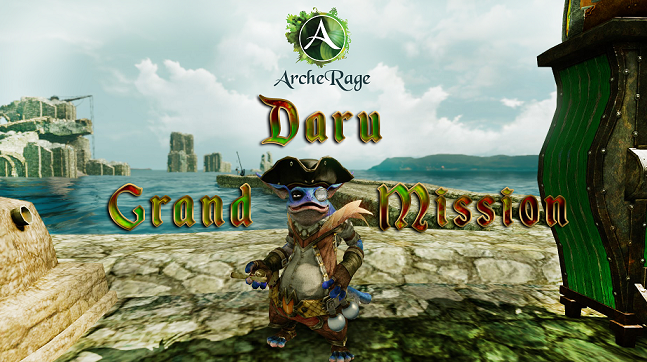 Daru Grand Mission
(October, 21st - November, 12th, 2018)
(August, 20th - September, 9th, 2019)
​
Daru is a very busy race. They complete multiple tasks during the day. Help Daru with their Grand Missions. Daru is, as always, generous and kind, he will gladly reward you for your efforts.


Daily, 3 times a day (not less than in 1 hour after previous request), you can obtain a "Grand Mission Certificate" and have it exchanged to one of the random quests in the event Exchangers that can be found all over the archeage world.​
​
Exchanger location:​
* Divine Key Exchanger will remain in Mirage until September, 20th, 2019. ​
Quests tasks are various. Among them: ​
After you complete a quest, you'll receive a Divine Key Bundle that can be exchanged in our Mirage Island Exchanger for multiple items.
By completing the quest you also get a chance to receive Gilda Star (x2); Elixir of Greed; Shining Daybreak at your choice. Is this unique content? I remember some race across the seas events on other servers, but not like this, looks really good.

My first quest was mine 5 starshard veins, I did that. Then second quest i got, i cant accept it cuz i already completed it, so its prolly the starshard one again. Now i just got my third item from the timer, but i cannot get a third quest because i cannot complete the second quest...

Is it possible for this event to not give the same quest twice in a row or in a day ? o.o so i can actually continue doing it...
Edit: or maybe change it so that we can carry multiple of the mission items, cuz i cant get the third quest because of it being a unique item. different quests but all with same item that is unique .. kinda not handy
Last edited: Oct 21, 2018

I tried tossing the 2nd quest item i had, to see if the third would be usable. but nope, I think this event is bugged because all quests share the same name, and therefore cannot do another quest because "quest has already been completed", even though maybe you would get a different quest this time.

It's already a known bug that duplicate merit quests cannot both be completed, but now cuz event quests all have same name, you cant do more than one a day, even though you get 3 certificates to create quests.

What is the deal with the Goddess's Weapon Chest, Mysterious Egg, Decor chest, luck chest - what are in these boxes?
There is no amount, just hints of something but nothing telling us what we'll get for saving up 900 keys / 1,000 keys... i would hate to save up 900 keys for a basic base obsidian weapon when i could've used those keys for something a lil more useful.

Is there any way we can get better item descriptions?
U

This event runs for 22 day there is literlly zero chance to get 800-1000 key. Did I miss something? The luckiest of us can get 30/day (which is zero chance), and thats still 660. More likely to have 300-400 by the end of this event if you can afford to get logged in for 3 hours every day and actually do the event.

Event say we could trade divine key for gilda/pots but only the quest give it. What are the divine key use ? Gamble to get more key ?
L

@Sparkle Can we get clear info on this event rewards please?
Because you cant exchange the keys for the rewards that are mentioned in this post, you just straight out get those rewards from the quests and keys can be exchanged for boxes, but we have no info on what those boxes contain, or how on earth to get 1000 keys to get the egg.

Staff member
Administrator
@Aviendha there are 30 different quests in this event. Each quest is unique, so event if you see same quest name "Daru Secret Mission: Ocean", they have different tasks and can be accepted and remain active at the same time.
Here is the example:

Unfortunately, there is no way for us to remove the possibility of quests to repeat.

Staff member
Administrator
@Aumdaydar; @Updown; @drxela; @London you need to go to Mirage Island and find a Divine Key Exchanger. There you'll be able to exchange your keys to multiple items. You can find the full list by visiting exchanger.
Additionally to the keys that can be exchanged to rewards in Exchanger, if you complete the quest you can choose one more reward: Gilda Star (x2); Elixir of Greed or Shining Daybreak.

I think I got the worst quest possible. The pack has to be turned in at the Gold Trader which is only up at certain times. 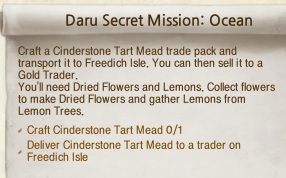 so it's a gamble event since u can't get high amount of key just by key. But gilda is fine as rewards

Sparkle said:
@Aviendha there are 30 different quests in this event. Each quest is unique, so event if you see same quest name "Daru Secret Mission: Ocean", they have different tasks and can be accepted and remain active at the same time.
Here is the example:
View attachment 4949
Unfortunately, there is no way for us to remove the possibility of quests to repeat.
Click to expand...

oh dam, then i got really unlucky that i got 3 the same quest in a row.. and i tossed one of them >.<
today i finally got some different quests though! been comleting all my certs

ty for your reply!

EEK said:
I think I got the worst quest possible. The pack has to be turned in at the Gold Trader which is only up at certain times.

actually it says "a trader" not "gold trader" which means you can hand it in for stabs or gilda as well.

Aviendha said:
actually it says "a trader" not "gold trader" which means you can hand it in for stabs or gilda as well.
Click to expand...

Pandie said:
It says "Gold Trader" in the quest dialogue but only "trader" in the quest objectives. I also had this type of quest and because I only read the objectives in the quest tracker, I turned it into the Gilda Trader and it did not count. BUT, you can turn it into ANY TRADER as long as you walk over the spot the Gold Trader normally stands at. Since he is not that close to the Gilda Trader you can easily miss that spot and not receive credit.
Click to expand...

I did the quest now myself today, and noticed it's similar to the pack quests that get you the 16x16 farm. Thankfully ^^

is there a way that we can combine these 9 parts into a whole? the erenor map pieces from decoration rng box